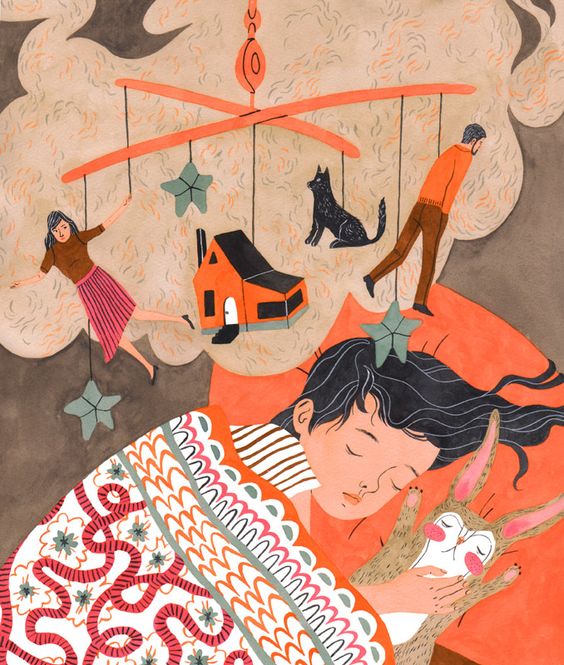 That damn dream again. It was years ago—singular, inconsequential, illogical—but it’s stayed at the back of my mind, refusing to fade from memory.

I’m sitting in a hotel room with green patterned wallpaper. Everything’s sort of out of alignment in the way that picture frames are slanted and door knobs are oddly placed and purposefully out of reach. When I stare hard enough at the walls, they melt a little and threaten to close in on me.

I’m in some sort of maze or sick escape room situation. This ornate room is reminiscent of Victor Hugo’s Places des Vosges apartment, except I’m at the Grand Hyatt, even if I have no idea how I arrived at that knowledge. I try to exit the room, but each doorway leads me deeper into a labyrinth of hallways.

In the next scene, I’m at the pool, presumably on holiday at a resort. It’s a nice sort of urban oasis, though the motel-like blocks flanking this one main pool are low-rise and people are chilling on balconies. I’m with someone from my past, and his presence troubles me. Maybe he’s telling me this is our last vacation together, or something in that vein. There is something final and absolute about being in that pool at that specific moment. Enjoy it while it lasts, is the message, but I’m unable to.

In the next and final scene, I’m fleeing. I’m desperate to get away from the mixture of humiliation, sadness, anxiety, and fear that’s bubbling inside me. Along the way, I spot a friendly face from a distance. Someone is waving and calling out to me and at first I think it’s a neighbor because he’s standing in front of a laundry line, in what looks to be a backyard. However, as I approach, I see that he’s that someone from the pool.

He seems like a different person—for one, he’s completely dry and is acting as if whatever conversation or agreement we had earlier at the pool never happened—but he’s eager to tell me something.

I’m relieved to see him and I listen in. But then he breaks into a fit of hysterical laughter that is at once frightening and condescending. “I believed you were better than this,” I say, before turning to run.

As my bare feet pound the ground, his laughter trails me all the way. It echoes in my ears long after I’m jolted awake.

I still remember that crazy hotel room with its green-patterned walls threatening to melt into me. The very pool scene where I felt compelled to put on a happy face even if I was dying inside. However, the thing that haunts me most is that humiliating, maniacal laughter.

Everything about this damn dream chills me to the bone to this day, and I’m almost angry at my inability to simply forget about it. I’ve certainly had dreams I’ve struggled to remember, but never this one. This dream will likely follow me to my grave.

Which is why I may as well write about it.